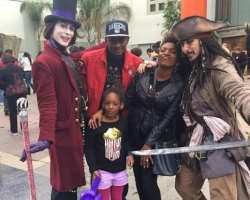 2face Idibia's wife Annie, her daughter Isabel and Tuface's younger brother, Charles were having fun at the Hollywood walk of fame in Los Angeles, California and shared pictures and One of Tuface's babymama, Sumbo who bore him a child but is now happily married to Pastor Adeoye of Royalty Christian centre stormed into the pictures and sent Annie Idibia, wife of Tuface a sweet message, saying they all looked good.

But it was tuface who replied her saying I see you. That was a really kinda too straight reply...he would have replied her better...or what do you think about 2face's reply to sumbo?

See the photo below: