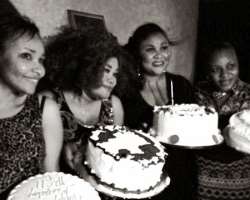 Some days ago, popular Yoruba actress and alleged party-freak make-believe star, Ireti Osayemi clocked 32. To celebrate her over three decades on earth, the alleged husband-snatcher held a private birthday party in Lagos with few of her friends in attendance.

We gathered that the wife of movie producer, Bakky Adeoye reportedly lodged in a luxurious hotel in Lagos.

Also, there were reportedly enough foods and drinks to go round for some of her friends that attended the exclusive birthday bash.