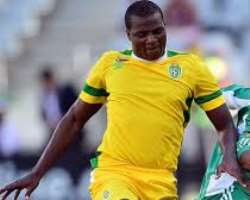 
The Warriors played the better part of the match with 10 men following the expulsion of midfielder Masimba Mambare by South African referee Victor Gomes in the16th minute.

Mambare was shown a straight red card by Gomes for a dangerous high kick of Nigerian goalkeeper Chigozie Agbim.

For many it felt like a harsh decision by Gomes since Mambare had no intention of injuring the Super Eagles goalkeeper as he has his sight firmly fixed on the ball.

From then on it became a tall order for the Warriors, who had already started the game on the back foot with the Nigerians probing for an early opener.

To their credit, Zimbabwe were able to repel all the Nigerians attacks only to be breached four minutes from time by Christian Obiozor's header.

Abdeullahi Shehu had Nigeria's first opportunity of the game with just three minutes gone, the striker shot wide from inside the area after some good work by Abubaker Ibrahim.

Christian Pyagbara tried his luck from range in the 27th minute, but the midfielder's effort went high and wide.

Abubaker Ibrahim came close to giving Nigeria the lead in the 37th minute with a shot from distance but Zimbabwe goalie George Chigova was equal to the task.

Playing with a man short, the Warriors failed to make a shot on target in the entire first half as Agbim had little to do.

Simba Sithole, who on Friday agreed to join South African side Ajax Cape Town, came close to giving Zimbabwe the lead in the 55th minute but the striker fired his effort into side-netting.

Solomon Kwambe tried his luck from range in the 64th minute but the defender fired his effort high over the bar.

Ejike Uzoenyi nearly opened the scoring in the 78th minute, the striker did well to beat his marker before firing straight at Chigova.

Ibrahim tested Chigova two minutes later with a shot from a tight angle, but the Warriors number one held on comfortably.

The Warriors finally got their first on target in the 83rd minute when Kuda Mahachi got behing the Nigerian defence  but could only fire straight at Agbim.

Two minutes later, Obiozor gave the Super Eagles the lead in the 86th minute with a header from close range, after being picked out by Ejike Uzoenyi.

Meanwhile, the Warriors had on Friday night threatened to boycott the match protesting against the failure by the Zimbabwe Football Association to pay them their winning bonuses and allowances.

On Friday the players refused to train demanding that they are paid their dues before the end of the tournament.