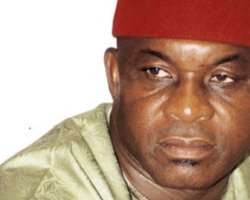 
Party affiliations came to the fore on the floor of the  Senate Tuesday as Senators towed party lines  when the All Progressives Party (APC)  tried to measure their strength by calling for a complete review of the 2014 Appropriation Act.

The party which brands itself as progressive anchored their call on the claim that the proposed 2014 budget before the Senate is anti-people.

Their position did not go down well with the senators on the platform of the Peoples Democratic Party (PDP) who rather  pushed for its prompt passage after a few alterations.

As the debates progressed, the inclinations of each of the contributors reflected their party's positions.

Most contributors were interrupted recurring 'point of order' raised by senators to checkmate different speakers, tilted along party lines even as the bill duly secured the support of PDP senators.

However, there were also senators from both parties who gave an objective assessment of the budget without prejudice to party affiliations.

Leading the debate on the Appropriation Bill, Senate Leader Victor Ndoma-Egba recalled that the total budget of N4.6 trillion was laid before the chamber on December 19, 2013 by the Coordinating Minister for the Economy and Minister of Finance, Dr. Ngozi Okonjo-Iweala.

While noting that the budget was predicated on $77.5 oil benchmark, with N2.4 trillion as recurrent expenditure and N1.1 trillion as capital expenditure, Ndoma-Egba gave a further breakdown of the budget to include N39.6 billion for statutory transfers, N712 billion for debt service and N268.37 billion for the Subsidy Reinvestment and Empowerment Programme (SURE-P) fund.

In his contribution, Minority Leader, Senator George Akume, observed that the budget was not accompanied by certain documents, which according to him, would have helped the senators make meaningful contributions to the proposal.

He listed such documents to include copies of underlying revenue and expenditure profiles for the next few years, a detailed analysis of budget performance in the preceding year, as well as fiscal targets in the year under consideration.

On his part, Senator Ahmed Lawan (APC, Yobe North) described the budget as the worst proposal for Nigerian masses in the country so far. He stated that the budget had not shown any intention to address poverty and protect the vulnerable in the society.

He observed that the 2014 budget could not be discussed without reference to 2013 budget, which according to him, showed that the total 72 per cent of recurrent expenditure contained therein was fully implemented, whereas a paltry 28 per cent of capital expenditure was implemented in the out-gone year.

He argued that implementation of the 2013 budget showed that only about N400 million was spent out of over N1.60 billion.

He said in this circumstance, the ideal thing for Okonjo-Iweala to do was to honourably resign having failed to achieve what the administration hired her to do.

He also criticised allocations to the Niger Delta region through Niger Delta Development Commission (NDDC) and Niger Delta Ministry, which he put at N163.1 billion as well as the N340 billion budget on security, lamenting that only N2 billion was allocated for development initiatives in the troubled North-east zone.

Also echoing Lawan, Senator Alkali Jajere (APC, Yobe South) said the entire budgetary estimates did not reflect both the political and economic realities of the nation.

He therefore suggested that the budget should be returned to the executive to re-work in a way that it would reflect the true state of Nigeria’s political and economic configuration.

In the same vein, Senator Sardiq Yar’Adua (APC, Katsina Central), who described the budget proposal presented by Okonjo-Iweala as 'Okonjonomics', said the minister had failed to bring her experience as a former World Bank chief to bear and therefore should resign.

But Senator Babajide Omoworare (APC, Osun East), who criticised various allocations in the budget, said the Senate was duty bound to tinker with the proposal and ensure that they are properly allocated, as the case should be.

Doing otherwise, he said, would amount to surrendering the sovereignty of the legislature, as stipulated in Section 80/81 of the constitution, to the executive.

However, Senator Isa Galaudu (PDP, Kebbi North), who said he supported the passage of the budget, regretted that whereas Nigeria’s budget had increased by over 400 per cent from N947 billion it spent in 1999, the increase had not brought any noticeable difference to the citizenry.

He also lamented the alleged spending of $8 billion of un-appropriated funds as subsidy on kerosene by the Nigeria National Petroleum Corporation (NNPC).

He said such unaccounted spending was one of the reasons that budgeting had not been effective in Nigeria. He also lamented that from $11.5 billion in the Excess Crude Account (ECA) in January 2013, only $2.5 billion was left in the account today.

But Senate spokesman, Enyinnaya Abaribe (Abia South) mocked the APC senators as he urged the Senate to employ the strategy employed by the APC government in Rivers State, which according to him, presented a budget that the House of Assembly graciously 'gave back to the governor within one hour.'

Government House, saying the 2014 budget in the same vein should just be handed to President Goodluck Jonathan following the APC's example.

Also speaking, Senator Gyang Pwajok (Plateau North) said the N340 billion allocation to security and N68 billion to the judiciary did not reflect the reality on ground, adding these estimates were lower than what the two sectors deserved.

He also advised the federal government to emulate many states which he said had ensured that their capital votes were higher than their recurrent expenditure.

Commenting on the contributions of his colleagues, a senator who spoke on the condition of anonymity said the position taken by the senators was not an indication that the Appropriation Bill would be blocked or delayed as directed by the leadership of APC, but was reflective of the robust debate that is common in the Senate.