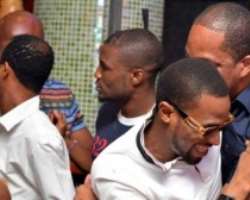 Check out the snippet of the official soundtrack for the Hollywood movie adaptation of Chimamanda Ngozi Adichie's amazing novel 'Half of a Yellow Sun' - 'Bother You', performed by award winning superstar, D'Banj.

The award winning book, Half of A Yellow Sun, written by renowned writer, Chimamanda Adichie has been adapted to a movie. The book which tells of the sad story of the Nigerian Biafran war has received massive reviews and will soon be translated to and released in a movie. Biyi Bandele, british - based playwright will be oversaw the shooting and production which took place in Nigeria. Hollywood actors Thandie Newton and Chiwetel Ejiofor featured in the movie. Set in the 1960's, the book gives a graphic description of the events that marked that period in the nation's history.

The writing style and the plot are detailed and precise which is why it won the much coveted Orange Prize for Fiction 2007.