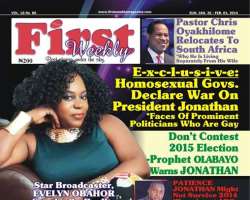 **Faces of Prominent Politicians Who Are Gay

Fresh and authentic news filtering in social circle indicates that a group of powerful politicians, who are prominent in the act of homosexuality, are the force behind the seemingly unpopular agitation against the anti-gay bill, which was recently signed into law by President Goodluck Jonathan.

At the forefront of this group is a very powerful oligarchy, which has seen it all in the business circle having been on the board of many viable companies including a bank owned by a very powerful chief from the South West.

Also prominent in this clique is a top politician in the seat of governance in Nigeria, whose voice cannot be ignored as he stands as the most powerful politico from his stock in the present dispensation.

Two Governors from a very influential geographical area in the country are also neck-deep in this agitation against the Bill, but cannot come out to admit their preference for same sex.

The last personality that cannot be ignored is this slim-built politician, who sources say might be back to reckoning soon in the scheme of things in the country.

Our investigations revealed that the godfather of this powerful league of homosexuals is now the vice-president of a powerful elitist sport that once claimed the life of a top government official many years back.

A source actually revealed that this group operates like a cult; they know themselves and always ensure that their members rise into prominence.

The said leader always dresses like a monarch and goes around in a full paraphernalia of royalty in view of the powerful title he holds in the particular part of the country he hails from, he is in his 70s or early 80s now.

“He is stupendously rich, a traditional title holder and served on the board of a popular bank owned by a powerful chief from another part of the country, you can also trace his fingers on the board of many blue chip companies. The first Governor is slim-built, very handsome and deeply close to the big man in the government circle, he actually owned his rise to this quiet and also good looking politician, who sources said has slept with some of the aides of this Governor and the Governor himself.

“This set of folks is known to take advantage of poverty stricken gang boys, with promises of empowering them financially. It couldn't have been worse than Sodom and Gomorrah,” a source told us.

The second Governor is said to be neck deep in this gay mess that his exploits once threatened his government and he had to practically go on his belly to appease a group, which threatened to expose his activities about four years ago.

“At a point, the most popular talk on the streets of the state capital is this phrase “the Governor, who goes in pampers,” you know what that means, it is now that he is getting ready to quit office that he is having the effrontery to talk.

“These are high ranking gangs bankrolling the activities of the gay rights group behind the iron curtain, I wish they can be bold enough to show their faces just like their counterparts in the western world,” said our source.

Our investigations revealed that they are aware of the implications and would do or go to any length to cover their tracks.

“They use middlemen, who are close to them to reach out to these gay rights advocates to give them the courage and the financial backing to fight their cause in Nigeria and abroad,” a source told our reporter last week.

The Nigerian anti-gay law bans same-sex marriages, defying a threat from Britain to withhold aid from nations violating gay rights.
The law by Africa's most populous nation calls for a 14-year sentence for anyone convicted of homosexuality. Anyone who aids or "abets" same-sex unions faces 10 years in prison, a provision that could target rights groups.

Homosexuality is illegal in most African countries based on remnants of sodomy laws introduced during the British colonial era and perpetuated by cultural beliefs.