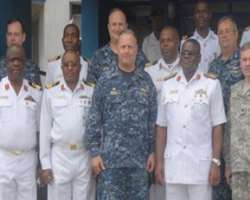 
The new Flag Officer Commanding (FOC), Western Naval Command, Rear Admiral Samuel Alade, has vowed to raise the bar in the fight against oil theft and piracy within his area of responsibility.

Alade, who is the command's 34th FOC, gave the assurance while taking over the command's leadership from Rear Admiral Ibok Ibas, at the Western Naval Command, Apapa, Lagos. He said Lagos, being the economic gateway of the nation, would be given the deserved security attention, so as to ensure free flow of economic activities on the sea.

Alade pledged to give his best to the nation without compromising the interest of the nation, adding that the command would continue to strictly follow the Chief of Naval Staff's strategic guidance 01 and 02. Earlier, during the passing out parade held in his honour, Ibas said the command sustained its commitment to effective internal security operations in its host state.

Ibas, who served as the command's 33rd FOC between Jan. 18, 2013 and Jan. 16, 2014, was redeployed to the Armed Forces Command and Staff College as Deputy Commandant. He disclosed that the command under his tenure, hosted number of high profile port calls, conferences and exercise, adding that, foreign ships that visited included Spanish Naval Ship 'Relampago and Rayo.'

According to him, these achievements would not have been possible without the professional and moral guidance as well as the financial support of the immediate past Chief of Naval Staff, Vice Admiral Dele Ezeoba. – ThisDay Live