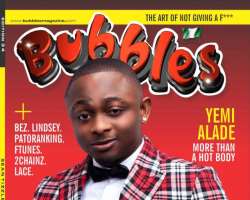 The year 2013 was a very successful one for fast-rising singer, Sean Tizzle. He enjoyed the spotlights as well as getting big shows to perform at.
His 'Sho Lee' single was highly requested for on radio while many danced to the song whenever it was played in clubs and social functions.

For those in the entertainment industry, the publication, Bubbles Magazine will not be new to them. The widely read magazine has profiled top artistes in the country. In its January edition, which is the first for 2014, Sean Tizzle graced the cover.

The young man was celebrated by the magazine and was described as a beacon of hope for millions of youths.

In the January issue of the paper, Sean Tizzle took the magazine through his journey to stardom. He hinted that one of his forthcoming single is titled 'The Journey'.