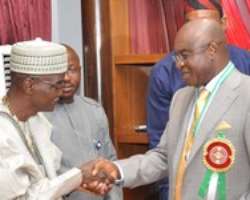 This is contained in a statement signed by Mrs Janet Mambula, the Head of Public Relations Division (NASC) in Abuja on Wednesday.

Before this appointment, Ibikunle was the Director of Appointments and Training in the commission.

Ibikunle, who joined the commission in 2002 as an Assistant Director, thus becomes the first female officer to hold such position in the commission.

The position became vacant following the retirement of the former secretary, Chief B. N. Osuji who later died in Dec. 2012.