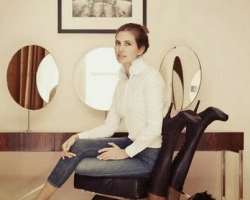 Russian oligarch Roman Abramovich's partner, fashion editor Dasha Zhukova, has apologised for a photo of her on a chair in the form of a black woman.

A Russian fashion blog published the photo along with an interview on Monday, sparking angry accusations of racism by bloggers outside Russia.

The fact it was the Martin Luther King holiday in the US fuelled indignation.

Zhukova told the Moscow Times she “utterly” abhorred racism and the image had been published “out of context”.

However, the blog, Buro 24/7, has not withdrawn the offending photograph, merely cropping it so that the colour of the figure in the chair can no longer be seen.

Zhukova, editor-in-chief of the fashion magazine Garage and owner of a high-profile Moscow art gallery, appears in the photo sitting barefoot in jeans and a blouse on the cushion of a chair fashioned out of a life-size sculpture of a bare-breasted black woman.

The mannequin-like figure appears to be dressed in bondage gear: stiletto-heeled black leather boots and other accessories.

In her apology, Zhukova writes: “This photograph, which has been published completely out of context, is of an art work intended specifically as a commentary on gender and racial politics. I utterly abhor racism, and would like to apologise to anyone who has been offended by this image.”

In the cropped photo now appearing above the article in Buro 24/7, where Zhukova talks about Russia's lingering “cultural isolation”, only the high-heeled black leather boots can be seen.

Buro 24/7 also issued an apology, saying it was “against racism and everything that may humiliate people.”

“We sincerely apologise if the posted photos insulted our readers,” its editors said in a statement.