I Will Play Second Fiddle In 2014--Davido 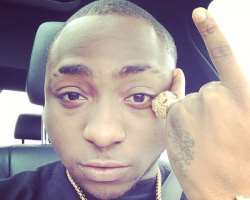 "Don't expect much from me this year, No be only me go blow na" Davido says

Popular music artiste Davido who we all know made a lot of successful hits last year which everybody enjoyed a lot but the African superstar made an announcement on his twitter account that he will focus mainly on all the artiste under the umbrella of his HKN music and that he's not going to release any album rather much work from him this year. He wants the money to go round!