Jennifer Lopez, talks about her love life, says: I do “not like to be alone” 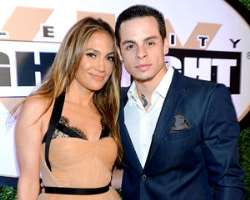 
Jennifer Lopez Talks Marc Anthony Split, Boyfriend Casper Smart: I Do “Not Like to Be Alone&quo …

Jenny from the block is just telling it like it is. During a panel for American Idol’s upcoming Season 13, returning judge Jennifer Lopez opened up about her split from ex-husband Marc Anthony, if marriage is in her future (she’s been dating dancer-choreographer Casper Smart for two years) and — to be blunt, how she’s not afraid to admit that she doesn’t like being single.

Shortly after her summer 2011 separation from Anthony, 45, the singer went on tour, marking a new chapter for the star. “That was a transformative year for me in so many ways. I had just divorced, and I went on tour with the kids and it was just like, ‘hooooo!’ And I left Idol. It’s like all my security blankets were gone and I was out there doing something I had never done before,” she said. (Lopez, 44, and the Spanish singer split in July 2011 after seven years of marriage. The pair are parents to twins Max and Emme, 5. The singer went on to join the FOX series as a judge for seasons 10 and 11 in 2011 and 2012 respectively.)

Lopez was married twice before Anthony. In January 1998, she divorced Ojani Noa after one year of marriage, and, after a notable relationship with Diddy, she married dancer Cris Judd in 2001 until their divorce in 2003. In arguably her most high-profile romance, she dated Ben Affleck for over two years. The exes — known as “Bennifer” at the time — called off their engagement in 2004.

“I’m one of those people who does not like to be alone. I have no shame saying that at this point in my life,” she explained during the panel. “I think we have to own who we are.”

As for walking down the aisle for the fourth time? “I don’t know, I don’t know, we’ll see,” she said. “I always believed in that institution. My parents were married for a very long time, for 35 years. I believe in it. It’s difficult. I’ve had my challenges but at the same time I believe in love. That’s the main thing.”

This article originally appeared on Usmagazine.com: Jennifer Lopez Talks Marc Anthony Split, Boyfriend Casper Smart: I Do “Not Like to Be Alone”