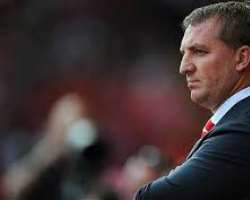 
Though Liverpool boss, Brenda Roger, insisted that Moses is still a part of his plans, the gaffer opted for Phillippe Coutinho and Luis Suarez in the attack

Nigerian international, Victor Moses, was confined to the bench for 90 minutes as Liverpool saw off Stoke 5-3 in a pulsating encounter at the Britannia Stadium to move back into the top four.

Though Liverpool boss, Brenda Roger, insisted that Moses is still a part of his plans, the gaffer opted for Phillippe Coutinho and Luis Suarez in the attack.

Liverpool were ahead after just five minutes when Aly Cissokho's speculative shot, which appeared to be going wide, was deflected in off Ryan Shawcross.

And just past the half-hour mark, Suarez was gifted his 21st goal of the season after a mix-up between Shawcross and Jack Butland allowed him to slot home.

However Peter Crouch struck with Stoke's first headed goal of the season to put the hosts back in it before former Liverpool midfielder Charlie Adam's sweetly-struck left-footed shot from long range sailed past Simon Mignolet and into the net.

Liverpool then took the lead again just six minutes after the break, with Steven Gerrard sending Butland the wrong way from the spot after Marc Wilson had brought down Raheem Sterling in the box.

Suarez then curled in his second and Liverpool's fourth on 71 minutes, having been put through by Sturridge, who returned from an ankle injury to make his first appearance for the club since scoring in the 3-3 Merseyside derby at Everton on November 23.

Jonathan Walters made it a nervy finish when he stroked the ball in to make it 4-3 with five minutes remaining, however Sturridge ensured all three points for Liverpool when he scored from close range at the second attempt late on.