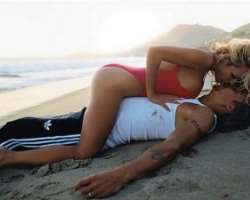 True love never dies, and Pamela Anderson may have realized as she remarried ex-husband Rick Salomon.

46-year old Anderson confirmed her marriage on E!, making it the 4th time she'd be walking down the aisle.

The former Playgirl was previously married to Tommy Lee, Kid Rock and Salomon - though her marriage to Rick was annulled in 2008.

The two got back together back last summer, with Pam talking about Rick with Ellen DeGeneres in October.