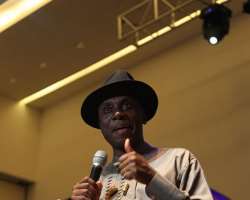 Amaechi had presented a proposal to spend N485.5 billion to the Rivers State House of Assembly on Jan 7, which was approved the same day.

The governor, while signing the bill into law, said that completion of ongoing projects in the state would be the main focus of the budget.

He said that his administration embarked on various projects in health, education, roads, transport, power, water, agriculture sectors and other critical infrastructure.

Amaechi commended the state lawmakers for their prompt passage of the bill which, he said, would enhance sustained provision of people-oriented projects in the state.

He also commended the legislators for their firm decision to defend and uphold the country's democracy as they demonstrated in the passage of the bill.

The governor said that their action showed their determination to carry out their legislative functions effectively in spite of some hitches.

"Let me thank the House for its action and for upholding the right of all Rivers people to good governance," he said.

Earlier, Mr Chidi Lloyd, the Leader of the House commended the state government for its achievements.

"Your Excellency, we urge you to continue to deliver the dividends of good governance as you have done," Lloyd said.