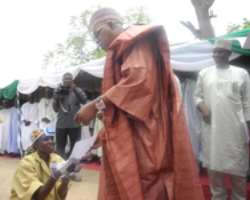 
The Borno State Government on Thursday said it planned to recruit 100 fresh graduates to beef up the state civil service.

Governor Kashim Shettima made this known when he received a delegation of past labour leaders in the state at the Government House, Maiduguri.

Shettima explained that the objective was to fill the existing vacancies at the middle cadre level in the service due mainly to retirements and death of civil servants.

“We plan to recruit 100 fresh graduates as administrators into Borno Civil Service.

“The essence is to fill the existing gap created at the middle cadre level in the service due retirements and deaths,'' he said.

Shettima added that the recruitment would hold in the first quarter of the year.

Chiroma commended the governor for his developmental projects in spite of the prevailing security challenges facing the state.

He appealed to the government to ensure regular release of overhead to state ministries and departments to enable them carry out their functions.

The former president commended the harmonious relationship between the government and the labour, and urged both parties to work toward sustaining it.