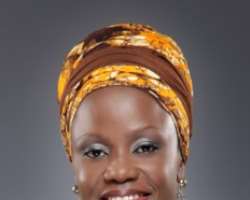 Nollywoodgists.com has been reliably informed that popular artiste, Sola Allison has relocated to Lagos State. The sonorous singer, who gained fame through her hit song, 'Eji Owuro' in 2003, left her former abode in Ibadan, the Oyo State capital, to the Centre of Excellence, as Lagos is fondly described.

An insider squealed to Nollywoodgists.com that Sola 'ported' to Lagos along with her husband, Toyin Obaniyi, adding that they now live in Ajah area of the state of 'aquatic' splendour.

We were further informed that the artiste made the decision to move from Ibadan to Lagos because of her career, and also to move closer to her market. Our source said that Sola and her husband moved to Lagos about five months ago.

It was also gathered that the singer is now adapting well to the hustles and bustles of Governor Babatunde Fashola-led state, which now has stringent rules and regulations.

The delectable songstress is one of the most respected artistes in Nigeria. Few years ago, she was among the judges in the popular MTN Project Fame West Africa, a music talent-hunt programme.

Sola was born in Ikorodu, Lagos State, where she had her primary and secondary educations before heading to the Polytechnic Ibadan to study Music Technology in 1997, where she graduated with an Upper Credit, specialising in Voice Major, Piano Minor. She already has four albums to her credit and has worked as back-up singer for artistes like Stella Monye, Kayode Olajide and a host of others.