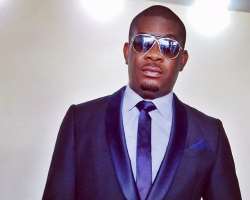 Don Jazzy is not a new face in the country and in the industry. He has won several awards and clinched several endorsement deals on his own as a brand. The beat smith has also been able to bring out the best in artistes like Dbanj, Tiwa Savage, Wande Coal among others. At some point he was also an export when he was contacted to work on a track off Jay Z and Kanye West “Watch the thrown” album and he did not fall below standards.

This gist going around town has it that the successful record label executive is currently putting plans in place to build a multi-Million Naira music empire which will be called “The Mavin Office”. And also we heard he has just signed on some new talents that are currently working in the studios at the moment. Sources says the new talents are waiting to explode and if care is not taken they might be bigger than his previous artiste.

Also referred to as Don Baba, the beat smith was the hand behind popular pop singer Dbanj but the duo parted ways when Dbanj got signed on to Kanye West G.O.O.D Music. At the moment, there are plans to reconcile the two. Most efforts made earlier has failed but the recent effort by American rapper Wale seem to be working as the duo we heard are currently working on new beats.

He recently was rated as the 36th. “Most powerful celebrity in Africa” according to Forbes. Born Michael Collins he is a graduate of Business Management at the Ambrose Alli University Ekpoma in Edo state. He moved to London in the United Kingdom in 2000 after his Uncle invited him to come play the drums for the neighborhood Church.
-Aproko City
Click the link below to go to...