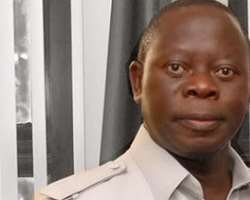 Few weeks back it could be recalled that 'Go and Die' widow who was first despised by the governor of Edo State, Adams Oshiomole received the sum of two million Naira, a public apology and scholarship for her son she has now been appointed as Special Assistant on Environmental Matters to the Governor of Edo State, with so much criticism when he told her to go and die he wouldn't make such mistake anymore and this much Generosity shown by the Governor of Edo state is a good one.

Yesterday at the New Benin by Total fuel station in Benin City,Gov Adams Oshiomole and his entourage were passing by and as usual,he was on foot while his cars were on the move. …..

Some little children hawking (with their goods on their heads) saw him and began running for their lives but a little girl hawking Plantain chips stood still because she was perhaps too sacred to run…..

Gov Oshiomole got to where this little girl was standing,looked at her and as everyone stood still and watched the outcome,he brought out his pen and wrote her a 1million naira cheque and threw her plantain chips into the air and people began catching them to eat