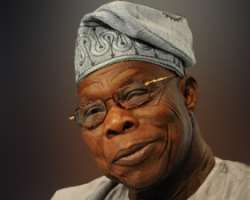 
The Lagos State chapter of the Peoples Democratic Party has described the visit of the leadership of the All Progressives Congress to past heads of state and PDP leaders as laughable, saying the trips were only meant to give the opposition merger false confidence ahead of the 2015 election.

It said despite APC's visits, it would not secure the support of former President Olusegun Obasanjo, and other past heads of state, especially those who are members of the PDP.

In an interview with SUNDAY PUNCH, the Publicity Secretary of PDP in the state, Mr. Taofik Gani, said APC leaders had embarked on the trips to visit some prominent Nigerians, mainly to embarrass PDP and excite themselves.

He said, 'It has become really comical. It has become known that they are taking the Nigerian polity for granted. The APC's visit to past heads of state and PDP leaders were mere attempts at embarrassing PDP.

'There is no way APC can get (former President Olusegun) Obasanjo to be part of them. Interestingly, Obasanjo told them 'I can never be part of you.' They just want to excite themselves and give themselves pseudo-confidence.'

Gani added that APC had become aggressive in its recruitment of politicians, because it realised that it was losing the confidence of the people.

He noted that as a result of that, APC has made no attempt to scrutinise the people joining its fold.

The Lagos PDP spokesman also faulted the report that about 1000 of its members defected to APC, saying it was mere propaganda. He, however, admitted that one person defected.

He said, 'That story is just hype. The fact is that the man that reportedly defected was never a card-carrying member of PDP. He wanted to contest the local government election. He didn't get the kind of support he wanted from the PDP leaders in the Ikosi-Ejirin Local Council Development Area. He came to us and we felt that such a person should be allowed considering the fact that we didn't prepare for election in 57 local councils; and we needed people to participate, so we gave it to him. It is not a surprise that he decamped.

'What is surprising is that they said 1000 people decamped with him. That is a lie. They should show us the video. I see it as propaganda. It was only one person that decamped, but they are now claiming he decamped with over 1000 supporters; that is a bogus lie. It is very insignificant as far as our fortune in Ikosi-Ejirin is concerned and Epe local government.'

He added that PDP was not relying on politicians to win Lagos in 2015, but on the 'already-disenchanted masses of Lagos State, who would stand at the polling booths and vote out APC.'

He said some people had been quietly joining PDP from APC but they have decided to keep quiet about it. Punch