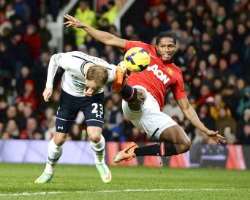 
Tottenham Hotspur's Christian Eriksen, left, scores with a header despite a late tackle by Manchester United's Antonio Valencia in their Premier League match at Old Trafford in Manchester, England, on Wednesday.

avid Moyes labeled a controversial decision by World Cup final referee Howard Webb as 'scandalous' in the wake of his team's 2-1 home defeat by Tottenham Hotspur on Wednesday.

The Manchester United manager was incensed by a late decision not to award United a penalty when Tottenham goalkeeper Hugo Lloris challenged winger Ashley Young and questioned whether England's most respected official should be operating in the Premier League.

Despite TV pundits widely backing Webb's decision not to give United the penalty, an award that would surely also have led to the goalkeeper's dismissal, Moyes was adamant that the 42-year-old Yorkshireman should be dealt with by the body who appoint match officials.

'It was a scandal,' Moyes said. 'It's reckless, it's late, it's in the penalty box, I don't know what else you can say. If you follow through on a player anywhere else on the pitch, foot-high, it's a sending off and a penalty kick. Ashley Young gets the ball and he follows through. It's an incredible decision that didn't go our way. It's one of the worst I've seen. You only hope the people who put the referees in there look to see if the referees are doing as well as they can, but they keep picking them don't they? The people who employ referees are going to have to look at that.'

The United manager's angry mood was not helped by Webb showing a yellow card to United youngster Adnan Januzaj for 'simulation' in the second half. It is not the first time this season the talented winger has been punished for diving, but on this occasion Moyes believed his player was more sinned against than sinning.

United have now dropped 26 points in the current campaign, one more than they squandered all of last season in winning the title in Sir Alex Ferguson's farewell term. More alarmingly, they now face the real prospect of becoming only the second defending Premier League champions in history to finish outside the top three the following year.

Emmanuel Adebayor was one of a number of Tottenham heroes, scoring the opening goal and putting in a spirited display, before being stretchered off injured after 70 minutes. By that stage, Christian Eriksen had doubled Spurs' lead, with Danny Welbeck quickly responding with the third, and final, goal of the day.

'He's got ice on every part of his body at the moment, he doesn't know what hurts more, but he's a top striker, one of the best in the league. When he performs like he is at the moment, he's almost unstoppable,' new Tottenham manager Tim Sherwood said of Adebayor. 'Let's hope we can keep him going because he's massively important to us. He seems happy in himself and wants to play every minute - apart from when he has to come off on a stretcher - but they were all heroes today. We could have done better, and moved the ball a bit sharper, because I thought United were there for the taking, but I thought we showed the heart of a lion out there.'

In other matches on Wednesday, Everton slipped out of the top four despite Leighton Baines scoring a stoppage-time penalty to earn Roberto Martinez's side a 1-1 draw at Stoke City, who had taken a 49th-minute lead through Oussama Assaidi.