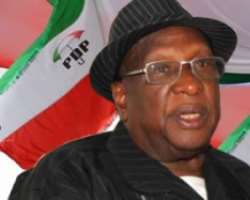 There were indications on Tuesday that the fate of the National Chairman of the Peoples Democratic Party, Dr. Bamanga Tukur, would be determined during the party's National Executive Committee meeting on January 8, 2014.

The PUNCH learnt that the meeting would be preceded by those of the Board of Trustees and the national caucus of the party on January 7.

A very reliable NEC member said on Tuesday that Tukur's fate would be discussed during the January 8 meeting since PDP governors were still divided on his continued retention as the national chairman of the ruling party.

It was gathered that while some of the governors believed that it would be suicidal for Tukur to be sacked a year to the general elections, others were of the opinion that his removal would restore confidence in the party.

Our source said apart from Governors Sule Lamido(Jigawa) and Babangida Aliyu(Niger) whose views on the national chairman are well known, some of their colleagues were waiting for the NEC meeting to voice out their opposition to Tukur's continued leadership of the party.

'The two governors, who are part of the aggrieved seven governors before five of them defected to the All Progressives Congress, are still insisting that the chairman must go. We also know that there are some of their colleagues who are waiting for our next NEC meeting to also kick against Tukur's continued stay in office.'

But the source, who is a supporter of the national chairman, however, said that there was nothing to warrant his sacking.

He also dismissed the rumours that Tukur was planning to sue the NEC in order to stall any move to remove him from office.

Tukur's Special Assistant on Media, Mr. Oliver Okpala, who spoke on the telephone with one of our correspondents, said his boss would allow NEC to do its job since he was also member of the body.

Okpala also denied the rumours that Tukur was planning to drag the NEC to court.

He said, 'He (Tukur) is part of NEC and cannot take it to court on any issue. Besides, there is no such issue (his removal) before the NEC. So why would he take the body to court? He would allow NEC to do its job on any issue and would not be part of those who want to destroy what he contributed to its building '

Meanwhile, a fresh crisis is brewing among the national officers of the PDP.

The crisis became public knowledge as the party's top hierarchy disagreed on the comment made by the PDP Deputy National Publicity Secretary, Mr. Ibrahim Jalo, on the Governor of Ebonyi State, Chief Martin Elechi.

Elechi was quoted as describing the proposed national conference as a 'big joke, waste of time, and a distraction to (President Goodluck) Jonathan.'

The governor was quoted to have also said that he would not be part of the conference.

While responding to the governor's position, Jalo had said the national dialogue was the product of a PDP-led Federal Government, adding that it was wrong for any member of the party to criticise it.

He had said, 'The national conference is a product of the PDP-controlled Federal Government.

'The President is the leader of the party and the national conference is the initiative of the Federal Government.'

He added that it would be out of place for any state not to participate.

However, the National Publicity Secretary of the party, Chief Olisa Metuh, issued a statement dismissing what Jalo said.

Although he did not mention Jalo's name in his statement, Metuh said the party did not authorise anyone to speak on the matter.

Metuh's statement on Monday reads, 'We wish to clarify unequivocally that the National Working Committee of the PDP never in any manner whatsoever made or authorised any comment on the said report.

'The PDP as a well organised democratic institution has duly established channel of external communication which is carried out with the utmost sense of responsibility after due clarifications on issues.

'It is, therefore, wrong and completely unacceptable for anybody to present statements made by individuals who are not members of the NWC of the PDP on the said report as the official position of the party; more so when such statements were made without due clarifications from the governor.'

Investigations by our correspondent showed that the fear of further defection from the PDP by its elected officials was one of the reasons the party disowned Jalo.

The party recently lost five of its governors and 37 members of the House of Representatives to the APC.

This, it was gathered, made Metuh to say that 'the entire NWC restates total commitment and respect to all our elected officials, especially PDP governors who remain strong pillars of the party.'

Metuh also cautioned all aides of elected officers at all levels of the party to desist from rushing to make statements that cast aspersion on PDP's elected officials, especially its governors.

He cautioned that all aides must henceforth guard their actions and utterances and ensure that they did not in any way undermine the unity and stability of the party.