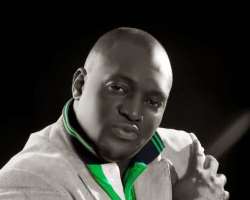 Sammie Okposo has renounced his membership with the Copyright Society of Nigeria (COSON). According to a statement released by his reps, Okposo's decision to leave COSON is due to what he says is the lack of transparency and accountability on the part of the collective management organization. The Gospel singer wants COSON to stop collecting royalties and acting on his behalf with immediate effect.

'I, Sammie Okposo, a proud Nigerian artiste wishes to notify the general public and all stakeholders alike that I have stopped being a member of COSON', he said in a statement released this week.

Okposo has also called for the registration of another CMO with a view to breaking the monopoly currently being enjoyed by COSON.Meanwhile COSON has responded to Okposo's statement saying that he will still return to COSON.

'With time Gospel Singer, Sammie Okposo will realize that there are few Nigerian institutions that are run with a level of transparency, accountability and professionalism available at COSON and he will return to the fold', Chinedu

According to Mr Chukwuji', 'Sammie has not availed himself the opportunity of visiting the COSON office and is clearly unfamiliar with the quality of personnel, the technology and processes put to work at COSON'.