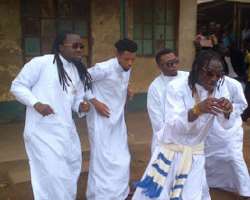 When a celebrity hails from a particular state and he is loved more by the people of the state , it is believed that his fan base should even be more from the youths but the reverse is the case for artiste Terry G who hails from Benue state

Popular IBB square arena has remained a beehive of social activities preparatory to the Christmas and new year celebrations, The IBB Square, Makurdi in Benue State was thrown into confusion and disarray last weekend when the Benue youth fiesta staged was disrupted as a popular Nigerian musician, Terry G, the crooner was performing on stage.

The Benue fiesta, which attracted hundreds of youth, including men and women was was organized by the member representing Guma/Makurdi federal constituency, Barrister Emmanuel Jime, who is known to be nursing gubernatorial ambition in 2015.

The venue of the event was jam-packed as all fun seekers in the agrarian state attended to unwind.

Prominent Nigerian artistes including J. Martins, I Go Dye, Ice Prince and Pastor Nicodemus Mbatsavtampu performed at event and it was such a lively occasion before it was rudely interrupted. Trouble started as Terry G was on stage performing and some youth suspected to be hoodlums began to throw sachet water on the musician and later broke bottles and charged towards him, while making loud noise. There was confusion as people ran helter skelter for the lives.