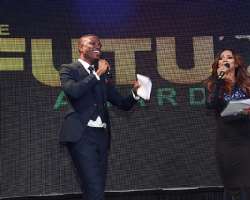 Actor OC Ukeje has wrapped up a spectacular year with his announcement yesterday as winner of The Future Awards Prize in Entertainment Talent. The event held at Aztech Arcum, hosted by the Rivers State Government and was anchored by OAP Toke Makinwa and rapper Vector.

Ukeje beat off the relatively better-known singers Ice Prince, Iyanya and Omawumi to pick the prize. This is the actor's second nomination for the awards – after he lost The Future Awards for 'Actor of the Year' to Tonto Dike last year.

“I'm just an ordinary guy who has been blessed, especially this year – a year that has completely taken me by surprise,” Ukeje said at the event. “It is very rare to win over musicians, so this very rare. I am very proud to finally be a recipient of Africa's biggest prize for young people, The Future Awards Africa. I dedicate this prize to Peace Anyiam-Osigwe for believing in me.”

The win caps up an impressive year for the 32-year-old. He had previously won for Best Actor at the Africa Magic Viewer's Choice Awards for '2 Brides & A Baby'. He was also Best Actor in a Leading Role at the Nigeria Entertainment Awards for 'Alan Poza', and the Nollywood Movies Awards for 'Hoodrush'.

The winner of the ultimate reward, Young Person of the Year – The Africa Prize was announced as Ugandan Ashish Thakar who is recognized as Africa's youngest billionare at 32. OC UKEJE - WINNER OF THE FUTURE AWARDS IN ENTERTAINMENT TALENT