MISS NIGERIA LOSES OUT ON EXQUISITE FACE OF THE UNIVERSE CROWN 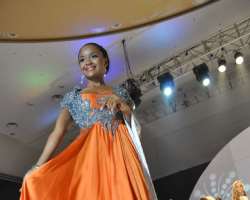 Tomi Lydia Salami, the Nigerian contestant for the Exquisite Face Of The Universe world finals lost out on the crown and $10,000 cash prize at the grand finale event, which took place at Eko Hotels & Suite yesterday Thursday December 19, 2013.

The Kwara State indigene made it to the top five finalists after the national costume, swimwear and evening gown rounds but failed to make it to the final three. She however carted away two awards for Best National Costume and Most Eloquent.

Some of the guests at the Exquisite Face Of The Universe 2013 world finals included Jim Ovia, Yaw, Shyne, Alex Ekubo, Mrs. Merit Gordon Obua, Mr. Kunle Bakare, Mr. Familusi Babajide among many others