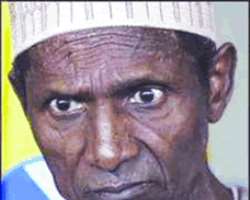 By Alvan Ewuzie
Wednesday, March 10, 2010
President Umaru Yar'Adua
The emergence of Dr. Goodluck Jonathan as Acting President may never have happened if the governors-in-law of ailing President Umaru Yar'Adua were not brought into the picture, Daily Sun has authoritatively gathered. It took the intervention of the Governors of Kebbi and Bauchi, both in-laws to the Yar'Adua family, allegedly on the prompting of Speaker Dimeji Bankole, to get First Lady Turai Yar'Adua to back down on her alleged bid to keep Jonathan as Vice President instead of Acting President.

Similarly, Daily Sun learnt that the statement by presidential spokesman, Segun Adeniyi, in which he addressed Jonathan as 'Vice President' was actually a directive and it prompted a meeting at Katsina Governor's Lodge in Abuja where Bankole was said to have met with Governors Bukola Saraki of Kwara, Danjuma Goje of Gombe and the two in-laws.

'At that meeting the in-laws were sent to Turai to ask her not to interfere with governance in any way and to make no move to truncate the Acting President's position as enthroned by the National Assembly.' A usually reliable and impeccable source said: 'It was this threat on Turai that actually saved the day and got the so-called cabal to know that the game was up and that Jonathan had come to stay as Acting President'

Moves to install Jonathan, Daily Sun gathered, actually began on January 26 when four officers of the National Assembly. [Senate President and Deputy, Speaker and deputy], Aondoakaa, Principal Secretary to the Vice President, Governor Saraki, Secretary to the Government of the Federation, PDP Chairman, Secretary and Legal Adviser, met over the fall-out of Yar'Adua's long absence. At that meeting Daily Sun learnt that Vice President Goodluck Jonathan was pointedly asked to step up and take control, but he declined for fear that the National Assembly will turn down his emergence, especially when he begins to send comments to the legislature.

Senate President David Mark summoned a meeting of the 21 lawyers in the Senate to discuss the legal implications of an impending Jonathan presidency. 19 of them attended but 18 consented except for a Senator from the South-south.

The meeting resulted in the resolution at the floor where Yar'Adua was asked to transmit a letter to the National Assembly. A similar move at the House of Representatives failed even when Speaker Dimeji Bankole waved aside 13 points of order to allow the motion to be moved.

As the motion failed at the house, Bankole summoned a meeting at his lodge in Asokoro where he urged the governors to lobby National Assembly members from their states to support a united effort by both arms of the National Assembly to install Jonathan as Acting President. The meeting crystalised into Jonathan's emergence.

However, Daily Sun learnt that current stories making the rounds about Yar'Adua's impending return to office may well be a smokescreen to make some people relevant and not be ignored in the new scheme of things.