I Didn't Write Any Letter, I Love My Father So Much---Iyabo Obasanjo Denies Writing Letter Insulting Her Father 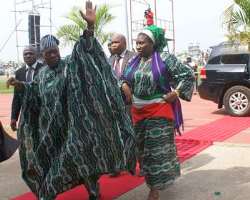 Obasanjo exposed the bitter truth and the man helped made president decided to blackmail him?

"If President Jonathan want to reply the letter my father wrote him, he should be man enough to reply direct. Why are they trying to make me a scape goat? I know my father very well and I don't question his judgement, I believe my father wrote his letter in the best interest of the nation. If Mr President disagree with some of the allegations in the letter, let him be man enough to talk directly to my father, he should stop involving me in an issue I know nothing about.

"How can you write a letter to insult my father and claim I, the daughter is the source. If that is how Ijaw people insult their father, I am a Yoruba Woman; we respect our parent in all circumstances.

Reacting to the fake letter against her father, Iyabo Obasanjo further stated that...

"I have never seen or heard this sort of fabrication in my entire life! I, Iyabo Obasanjo, never contemplate writing a letter to my loving father. I speak with him almost on daily bases. Olusegun Aremu Obasanjo is the best father in the world. He gave birth to me, he raised me up and gave me the best of education. I wouldn't have achieved whatever I did without my father. In fact, WHO AM I WITHOUT MY FATHER? As a father he never disappoints his children in any way, he is a father anybody wish to have.

"I, Iyabo Obasanjo, did not write any letter. Nigerians should please take note. The purported letter is a malicious lies intended to rubbish the good name of my family, when I get to the source of the letter, I will waste no time to take the necessary legal actions.
"I love my father and I never disrespect him."

Before It Is Too late, Obasanjo Writes to Jonathan (Must Read)