Video: The Banky And Tiwa Show On EbonyLife TV 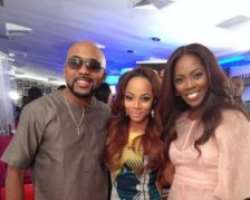 E.M.E Star Artist Banky W And Mavin Songstress Tiwa Savage have a talk show called the 'Banky and Tiwa Show', the talk show is hosted by two of Nigeria's top artist will be airing on Mo Abudu's EbonyLife TV.

The show debuts today at on EbonyLife Tv channel 165 at 9:30PM every Tuesday. On this show, topical and controversial social issues that border on the way we live our lives as Africans are discussed in a mature, non-judgmental and non-preachy manner. Some of these engaging social issues will include: Addictions, Homosexuality, Broken Marriages, Infidelity, Pastors and Private Jets, Transactional Sex and many more.

It gets better with deeply intellectual contributions from celebrity guests assembled from all spheres of life ranging from Artistes, Actors and On-Air-Personalities to Bloggers and Activists, to share their experiences, as well as shed more light through various perspectives. Always on call to lend a hilarious twist to some of the rather serious topics are famous Comedians, who cleverly spice up the topics from time to time with the much-needed comic relief.

Recently single Toke Makinwa is seen in a picture with Banky W and Tiwa, Tiwa Savage already being married, do we see a hook up between the two gorgeous and successful singles?