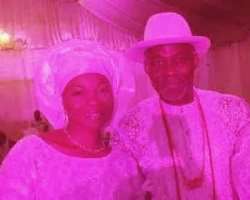 It was reported few months ago that veteran actor turned politician Richard Mofe Damijo, popularly known as RMD will be getting a wife for his son, Oghenekome Damijo this December. The commissioner and his beautiful wife, Jumobi couldn't hide their joy as they ensured things went according to plan

He led his kinsmen to the engagement ceremony of his son and his heartthrob, Eniola Abiodun on Thursday December 12, 2013 which was held at the Grandeur Event Centre, Oregun, Lagos