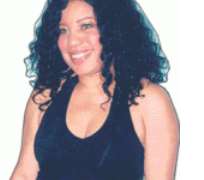 Things are not quite rosy with Monalisa. She and her ex-husband are not even talking after their divorce…not even about their daughter. She didn't even foresee a divorce or anything inimical to their wedding. Some people are blaming Emem Isong for Monalisa's woes, but she was quick to defend her saying Emem was dependable and available when other friends were not. Read all about it in this interview she had with Sam Olatunji.

Why didn't you defend yourself when people were saying all sorts of things when you separated from your husband?
Because I didn't want to join issues with anybody. Let me tell you something about the truth, it is constant. The truth will always be staring at you. Why should I to join issues with people, I don't do that. You've known me from times past when I was a kid I ran away from trouble. I don't join issues with anyone.

Would you give loving another chance?
I don't know.
What do you mean you don't know, you are young, you are beautiful, you have your whole life ahead of you?
I really don't know, because I am a very emotional person. I have a shield covering me at the moment and I don't want that shield to vanish. Love is something that will happen any way but for now I don't know anything about it.

So you've kept love at bay since last year?
Yes I have.

Are you saying you are not even sure if you will get married again?
I don't know (laughs).

How is Tamar, your daughter?
Right now she is in school. She is just oblivious to whether she has a father or not. She doesn't even know…. all I know is that she is happy and she is comfortable. May be as she grows up… I don't know, God will take control.

Has she seen her father since then?
No.

And has the father made any attempt to see her?
No.

And you are not worried that the man has given up on his daughter?
No, it doesn't matter. Let's not talk about this issue.

How does it feel to play the role of the father and the mother?
The challenges are there, but with God all things are possible.

How often do you go to location?
Every week. I just finished one last week Thursday and there is another one on Wednesday. It's every week for now.

Do you think losing weight made the difference?
I'm not sure. When you have a baby, even at work or if you are a banker, if they give you maternity leave, you just take up the leave and get back yourself. So that is what happened to me. You know as a career person and as an entertainer you can't afford to be fat, you can't afford to be big. I like to say the truth, you have to work out and shake the meal.

What role did Emem Isong play in this whole saga? There are people who till tomorrow will not forgive her… that she being a single mother encouraged you to be one?
The thing is that a lot of us are so judgmental and so hypocritical. I had a crisis and because I didn't want members of my family to know about this crisis, I took refuge with Emem Isiong and I am so glad till tomorrow because she did what a whole lot of people could not do. She took me in and kept me and my child in her house. Now why do people have problem with that, would they have rather see me wondering and begging. I didn't want to go to my mum and I didn't want to go to my uncle because I knew what the drama they would have played would have caused.

They would have scattered everything, because my family members were ready for anything. Is that where I want to go to? I needed a place where I can cool-off, I needed a place where I could fix and plan and think of the next step to take. I needed to know how to approach my family members concerning this crisis and to tell them please don't take any drastic action . Knowing who I am and knowing the fact that this is the man I was married to, why do people have problem with that… can't they just think and reason between the lines and realize that all the while I was married I was grateful? I didn't give any hint of being unfair; everybody came to the house and saw me very happy.

I didn't give a hint of what so ever, even to my mum. Why are people not thinking like that? Why are they trying to make it look like the woman that housed me was the cause of my marital crisis? Just calling other people names… it just shows you how hypocritical our people are. It is a shame. If I was in my wedlock and I was misbehaving and doing all kind of things , then they have all the authority to say anything they like. They should sit back and think deep and ask what happened, why did it happen and probably think about how they can do something to make amends. But no, they sit in their arenas and just draw conclusions and be judgmental.

But you never told anybody what happened?
No, because I am a respectable human being. I will not want to open my mouth and talk when the time is not right.

So when will the time be right?
The time came and I talked…. did you not read the papers? You want me to start talking when the heat is on.I am not designed that way. When the time came, I consulted a whole lot of people, I talked to my mum, I talked to my uncle. They said this is the time for you to talk and I talked, in a very simple language and not in a long interview …in simple language which everybody understood and I really don't want to go into details any more.

Will there ever be a chance of reconciliation?
You and I know that is not possible, so why are you asking me?

But people said that it's because you want to belong, that almost everybody in Nollywood except for Omotola is a single mother… because you want to be as free as any of them?
It's the same thing I have said over and over again, the way we think in this country is alarming. Marriage is a beautiful thing. I do not see any reason why a woman will leave her husband or why a husband would leave his wife for reasons that are not good enough. It was a matter of life and death that was the reason I left. I love to be married, I wanted my marriage to work, I really do not want to go into details. I don't know why you keep going on and on, you keep asking the same question.
Am I belonging now, please let me know, am I not the same actress who is still crying to go back to her career, please am I belonging.

Your family, they said really never wanted you to marry, why was there too much of family interference in your life?

First of all there is nothing like that, and secondly, I know where this kind of talk is coming from, thirdly; I was really listening to my family members. I wasn't supported to marry in the first place but because I wanted to marry who I wanted to marry without any family interference, I wanted so badly to build my family, to raise my children with my husband. I didn't want to listen to what people were saying, what my friends were saying, what my family was saying. I wanted to prove them wrong. I can't comment further on that, because I don't know what to say. It's a shame, somebody could actually sit down and think of a thing like this not knowing what the person is intending to do, that's my opinion.

Why did you ignore the whistle of the hunter like a straying dog?
It's just part of growing up and I am not regretting it. I don't regret getting married to my ex-husband.

Do you guys still talk?
No.

Why, nothing to talk about?
No.

Or is the matter still in court?
No.

That means you can't get married?
Let leave it for God, I can't comment on all those issues.