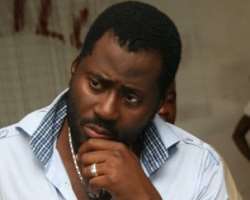 2015 is around the corner and politicians are busy getting their campaign caps on. Don't be shocked to hear that Nollywood is being dragged into it. Already, we have names like star actor, Desmond Elliot campaigning for Lagos politician, Jimi Agbaje, who is eyeing the state governorship. After Fashola's.

Leading the team of campaigners who call themselves 'Team Jaykay (Think Tank) are Alex Okoroji, Desmond Elliot, Benjamin Joseph, Gbenro Ajibade and a host of others.

Desmond carried a message on his Blackberry Status during the week, which reads:”Decide what you want, decide what you are willing to exchange for it. Establish your priorities and go to work.”

Well, I want a better and more comfortable LAGOS. I'm willing to exchange my 'in-action' and 'silence' to speak up for a leader who will give me the Lagos of my DREAMS.

I have established that making Jimi Kolawole Agbaje governor, is one of my priorities and I'm off to work on that. Join the MOVEMENT!!Its JAYKAY 2015 The hope has begun”.

Can you beat that?