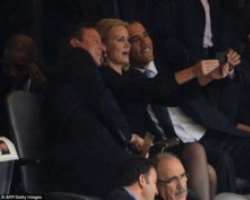 Barack Obama seemed very happy playing with Danish Prime Minister Helle Thorning-Schimdt rather than concentrating on the Nelson Mandela Memorial service yesterday in Johannesburg. The two world leaders joined by British Prime Minister, David Cameron were having a time of their lives as they took selfies in the presence of an 'uninterested' Michelle Obama and the rest of the world.

The US President, British Prime Minister and Danish leader all grinned as they squeezed together comfortably for a quick picture, prompting an outpour of criticisms on the social networks.

Web users continued to criticize the world leaders for undermining the seriousness and importance of the event to not only South Africans or Africa but to the entire world. They claim it was a time dedicated to reflect on the remarkable life of Nelson 'Madiba' Mandela and not a moment for fun fare plus it wasn't appropriate seeing how the Danish blonde shamelessly flirted with Obama in the presence of his [angry] wife.

Meanwhile, in a message directed at Mr. Cameron, Sarah McDermott twitted: 'You have precisely zero class or decorum.'

In addition to Twitter backlash, Mel Huang wrote: 'I wonder if Neil Kinnock got an ulcer seeing his daughter-in-law do a selfie with David Cameronat a memorial service.'

So far the image, which featured on several newspaper front pages yesterday, suggested that it showed a lack of respect for the solemn setting of the memorial service, according to UK's DailyMail.

What do you guys think of the world leaders' selfie at a memorial ground: cool or bizarre?