Of Political Jerks and Otiose Values: MOB Finally Unmasks Self 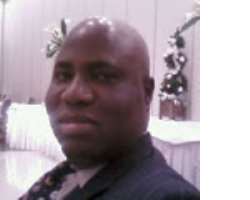 MOB, you are no Iroko, believe me; and besides, it takes many trees to see a Mahogany used in a djembe but if you beat your drum, how many will dance with you? You are not even an obeche or a wawa and until you become one, it will take more than Iyami Abeni to make you the next governor of Ekiti State in 2014. This is a pyrrhic ambition, perish it; believe me. Politics, as I indicated elsewhere is not about self. Biden accepted to be VP to a president who is the same age with his son; Hillary accepted to serve as Secretary of State to a man who he sparred with for the plum job; Kerry, who gave a platform to then Senator Barack Obama of Illinois when he tried his hand on the plum job later accepted to be Obama's Secretary of State, because these men and woman know it is all about the United States. I, I and I politics do not make patriots. Mr. MOB, chew this and do not destroy your political future.

Amazon's Novel Laughable Drone Supply Chain.
Jeff Bezos has done well for himself and his investors at Amazon. Cashing in on standing as a gatekeeper between owners of intellectual works and news consumers, he has succeeded in amassing stratospheric fortunes for himself and his stock-holders. Never mind he added no extra values to the books and merchandize he sells, but hey that is how capitalism works. His luck and chanced opportunities and, at times questionnaire business tactics notwithstanding, Bezos occupies a comfortable spot on Forbes List of World Billionaires and of course, he rakes in princely profits from my books and other authors as well. That is cool, considering the fact when he started, many priggish characters stayed away from his creation because of its effeminate nomenclature. Bezos has since overcome the stereotype, went on to diversify and now is the proud owner of one of America's breakfast companions; The Washington Post. But that is far as it goes until last week, when Bezos broached another issue, which he potentially sees as another milestone.

According to media reports, Bezos baby; Amazon is considering marketing and shipping its menageries of products across Continental United States by drones. You know those buzzing saucer-like mini-helicopters manufactured by the United States Armed Corporations also known as Unmanned Aerial Vehicles that creep in stealthily to take out Osama bin Ladin's “bad boys”? Well, Bezos want to use them to deliver merchandize to our homes and residences; in smaller sizes of course! I think the original idea was mooted by Papa Johns, the owner of the popular pizza chain of the same name. You know what? I will never, I mean never eat any pizza delivered by drone to my porch, trust me. Drones are for smoking out the “bad guys,” and should not be confused with Mr. Brown. I don't mind waiting for few hours for Charlie to deliver all our stuffs from QVC, Overstock and the rest via UPS but will call the law if I see a flying saucer buzzing at my backyard to drop off what? According to Reuters, overwhelming Americans, including yours sincerely, are not enamored with seeing any drone deliver what-do-you-call-it on our doorsteps. Yes, we are in the age of instant-this-instant-that, even instant-sex these days, without the pleasure of orgasm, but it is still a human race and not a rat race, so Mr. Bezos, thanks, but no thanks.

*Dr. Fayemiwo, CEO, Alternative Lifestyle Communication, DBA Chicago and co-author of "The Kingdom of Satan Exposed," is head of Global Missions and professor of Biblical Exegesis at Kingdom Bible College and Seminary, Tucson, Arizona, USA. He can be reached at: - [email protected] You can also visit his company website at: http://allternativecommunication.net/

Disclaimer: "The views/contents expressed in this article are the sole responsibility of the author(s) and do not necessarily reflect those of The Nigerian Voice. The Nigerian Voice will not be responsible or liable for any inaccurate or incorrect statements contained in this article."
Articles by The Christian Walk
14-10-2015  Request For A Ministerial Slot-the Federal Ministry Of Agriculture And Rural Development-for A Diasp2-10-2015  Without The Holy Spirit, You Are Not Saved And Not A Christian26-9-2015  The Jesus Christ Solution Center, Texas And The Glory Of The Lord God Almighty21-7-2015  Memo As President Muhammadu Buhari Comes To Washington13-7-2015  What Does The Lord God Almighty Want Me To Do?More...