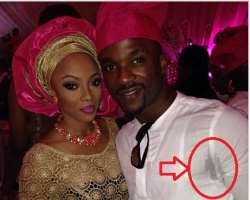 All over the world, public figures are expected to be near perfect human beings because of the attention on them. Though they are humans just like every other person, much is expected of them at all times. For this reason, some of them try as much as possible to comport themselves well in public.

Like MI sang in one of his songs, 'Nobody', which featured 2Face, he said 'just because you no tie shoelace, dem carry your gist around like a suitcase. Ask Timaya ask Wande, dem follow you bumper to bumper from Sunday to Sunday until you yimu yimu on a Monday'. 2Face even went ahead in the song to say that he has given it all up to what people say about him. But in a case where celebrities give room for the media to gossip about them, who is to be blamed?

This scenario can be seen from a picture of 'Kukere' master, Iyanya, who attended an event recently and was spotted with a sweaty and dirty armpit. So bad was it that the white top he wore that day got stained and it showed what looked like a yellow deposit on the cloth. Probably he is trying to show that he is truly an MTN Brand Ambassador.

This embarrassment would have been avoided with a deodorant worth of N200, but the singer chose to appear in public with a sweaty and dirty armpit.

Recently, Iyanya was reported to have raked in about N130 million worth deals in few months. If the singer was from the South Eastern region of the country, one would have not bothered about why he chose not to spend money on taking care of his body.