What Could Have Been Stella's Motif? 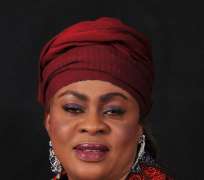 It is an African adage that a man who never knew when the rain started beating him will never know where he dried his body.

Ever since the controversy surrounding Nigeria's Aviation Minister, Princess Stella Oduah, and the purported purchase of two bullet-proof BMW cars for her ministry erupted weeks ago, I have been constrained to make my observation public. First I said to myself, Mr., you have been writing for close to four decades, and only a few government officials have in the past paid heed to your observations or made good use of them to better the lots of the poorest segment of the Nigerian society. You don't live in Nigeria. You don't earn from Nigeria. So, why bother if a minister bought an airplane for himself or herself using the entire money in the national treasury. They could. And Nigerians in the Diaspora no longer worry about all that because they have come to realize that they cannot do anything about it.

Then I thought again and said to myself, Mr. This is your fatherland. You are an elder citizen. You must say something if things are going wrong. You just can't keep silent while your house is being razed in an inferno. Because, when an elder sees and fails to speak out, the blame for what goes wrong comes to him. But if he speaks out and the youth refuses to adhere, the blame goes to the recalcitrant youth if things go wrong. So, at last I decided to speak out, to exonerate myself from blame.

Whenever a criminal case comes up for investigation, one of the most fundamental factors that guide investigators is the question of motif. Investigators usually want to establish why the accused would want to do the things for which he or she is being accused of doing. They would want to know what motif was behind the alleged criminal act.

Nigeria's Aviation Minister, Princess Stella Oduah, has been in the news recently in connection with two bullet-proof BMW cars she allegedly authorized to be bought for use in her ministry at a cost of US $1.6 million. Some Nigerians have condemned her for that and are clamouring for her removal from office. Others maintain that what she did was nothing to complain about in the face of all the fraud the nation has had to contend with in recent years.

The fact, I believe, is that those who steal government money do not “invest” the money in government business or plough it back into a government venture. They pocket the money or divert it into private bank accounts, using their friends, close relatives or business associates.

In Nigeria today, the Economic and Financial Crimes Commission, EFCC, has several cases of fraud it is investigating. Many have been prosecuted, some successfully, others unsuccessfully. These cases have one fundamental characteristic in common. The accused persons launched the money they allegedly stole into private bank accounts.

To the best of public knowledge, that is not the case with the current Aviation Minister. So, why is every “concerned” Nigerian, including Femi Fani-Kayode who made a mess of his tenure as Aviation Minister, be clamouring for Mrs Oduah's head?

As the son of Chief Remi Fani-Kayode, a first Republic politician, it was Femi Fani-Kayode who succeeded Professor Borishade as the Aviation Minister under President Obasanjo.

During Femi's tenure, he was involved in N19.5 billion (not million) Aviation fund bribe scandals. The charges preferred against him by the EFCC over the matter were later dropped. Still, the development smeared his career.

In June 2007, one of Femi's former aides, Miss Chioma Anasoh, was arrested by the Nigeria Customs Service (NCS) for money laundering. She was alleged to have attempted travelling out of the country with $240,000 through the Abuja Airport. Although he was not directly connected with the case, Femi was dragged into the issue.

In 2008, Femi was arrested by the EFCC and charged with 47 counts bordering on money laundering and lodgements he made into his private bank account. That same year, the Senate Committee on Aviation recommended that he be banned from holding any public office for five years. The recommendation was also dropped in due course.

Since Sahara Reporters broke the allegation a few weeks ago, Nigerian media have never had one moment of rest without stories of corruption allegation levelled against the current Minister of Aviation, Princess Stella Oduah, hitting the headlines. The claim is that the Minister masterminded the procurement of two bullet-proof cars through the Nigerian Civil Aviation Authority, NCAA – one of the agencies she supervises. The way and manner this story has been hitting the front pages of national newspapers only proves that there is more media interest in the entire saga than meets the ordinary eyes.

Unfortunately, Sahara Reporters who first broke the news of the purchase of the vehicles did not think it was necessary, especially when the image and integrity of a senior public office holder was at stake, to consider the issue of motif before reeling out the story. What could have been Stella's motif in authorizing the purchase of the vehicles? Had they done enough research and found that out, perhaps, their story would have taken a different slant.

In her 12-page presentation to the Parliament, Princess Oduah said in her own defence that in the last few weeks, she had received all sorts of bashing in the media. So many persons had also risen to her defence. Her traducers had abused her, some of them out of a genuine sense of outrage that she allegedly spent the sum of US$1.6 million of government funds to purchase two bullet-proof BMW cars for her personal use while millions of Nigerians are unable to afford three square meals daily.

She recalled that there had been attempts to clarify issues pertaining to this particular procurement and that in the process some of the issues had become muddled up. This was evidenced in her personal assistant's statement which focused on the personal security of the Minister without recourse to the procurement process and policy file to which he did not have access. This was why he made the statement that the procurement was for the “safety and security of the Honourable Minister whom he said was facing some imminent threats to her life on account of the reforms in the sector.

“The last official intervention in this matter came from the Director General of NCAA, the agency charged with the oversight of the aviation sector and the agency that actually undertook the procurement," she told the Parliament, adding that "whereas the Director General, DG, was right in saying that the vehicles were not bought for the Minister, the anticipated positive effect of this correct piece of information was marred by remarks credited to the DG suggesting that the agency was more concerned with issues of administration and information security which had no bearing on the issue on the ground.

In this regard, we must bear in mind that the DG was very likely guided by the provisions of the Official Secret Act but which I make bold to state before you must not take precedent over the Freedom of Information Act or the powers of the National Assembly under Sections 88 and 89 of the Constitution,” she said.“Let me therefore state finally concerning the above and for the records that there was no attempt at anytime to either deliberately mislead the public or conceal any information regarding this transaction; and also to formally apologize for whatever tension or perception of same as a result of the foregoing. On that note therefore, I stand before you as the Minister of Aviation, a citizen of Nigeria and one of your constituents and affirm the foregoing clarifications."

“The second category of my traducers is the entrenched interests in the aviation sector who, for over 38 years have held the sector by the jugular and refused to allow any meaningful development and change take place. For the over 38 years that our airports were a damning commentary on our status as part of the civilized world; or when our airspace existed without the requisite navigational equipment and facilities to make the airspace safe; these category of persons saw no evil and heard no evil while they happily clapped their ways to the banks! This group has carried on with bitter venom, .. throwing decency and honour overboard, lying and misleading the Nigerian populace even when they knew the truth because my team and I changed the game in favour of Nigeria attaining her pride of place in the comity of nations."

“It is for the first category, the Nigerian people who have acted out of a genuine sense of patriotism, that I seize this opportunity with both hands to let the world know the truth surrounding this matter. For the second category, that is the entrenched, corrupt and profligate individuals and entities who have caused the serious rot in the aviation sector, I owe no apologies; all I owe them is to further inform them that the current generation has seen through them and are no longer willing to tolerate their antics.”

It is not too much to ask. Nigerians must interest themselves with the motives of those who accuse others of corruption, those pots that are fond of calling the kettle black, before they queue up to blame. If Nigerians cannot read between the lines and see the reason some allegations are screamed louder than other more serious ones, then they cannot avoid impending trouble. In the present circumstance, a wise approach may be for Nigerians to neglect these accusations and get on with their lives in the interest of peace and the general good of our society. Worse things have happened in the past, and are likely to happen in the future, though we wish for the best.

The quantity of hot air that has been blown over this Aviation Ministry purchase obviously shows that the accusations themselves could have been generated from questionable quarters. Perhaps, they emanated from those who have lost in their desire to enrich themselves through illegal contracts from the Ministry. Perhaps there is some connection, somehow, as Stella herself testifies.

On a serious note, if Nigerians really want their sons and daughters abroad to come help develop the nation, they must learn to believe in them. They must learn to protect those who are out to protect them. In the face of the billions of pounds that are stolen every day through the pension funds, through the oil subsidy regime, through payment of ghost workers and so on, Nigerians shouldn't be fooled to knock their heads on a brick wall on account of US$1.6 million that was spent on the purchase of two bullet-proof cars for the Aviation Ministry. We use what we have to get what we want.