Wizkid & I Have Not Parted--Tania Omotayo 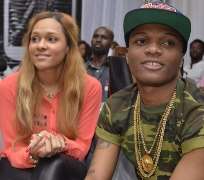 Tania Omotayo, girlfriend of pop music star, Ayo Balogun well known as Wizkid, has debunked rumour making the rounds that she and her boyfriend are no more dating each other.

The break-up tale came after the singer tweeted some hours ago, 'single nigga life', which some bloggers interpreted to mean that Wizkid and Tania were no more seeing each other as lovers.

While making the clarification a moment ago, when asked by a fan on twitter, Tania disclosed that nothing has come between her and her lover at the moment. The two lovebirds are reportedly live-in-lovers at Wizkid's Lekki home.

They reportedly met five years ago. Wizkid already has a son from a babymama.

Celebrity Quote: Eating your cake and having it.” – Genevieve Nnaji

Yvonne Nelson lights up London for her 28th birthday