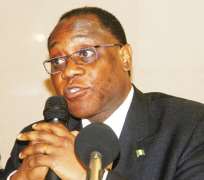 
The Federal Government has made available N9billion for micro, small and medium enterprises across the country as part of the implementation of the National Enterprises Development Programme, The Minister of Industry, Trade and Investment, Olusegun Aganga has said .

According to the minister,  'The Nigerian Government through the Bank of Industry's counterpart funding programme with seventeen State governments has generated a funding pool of N9billion for micro, small and medium enterprises across the country as part of the implementation of the National Enterprises Development Programme.

'We are here today in Bayelsa State to flag-off NEDEP and inaugurate the SME Council in the State because of my firm belief that the MSME sector is the bedrock of inclusive economic growth and for its strategic role as the driver of job creation and wealth generation.'


He spoke at the launch of NEDEP and the inauguration of the Bayelsa State Micro, Small and Medium Enterprises Council in Yenagoa on Friday. .

Aganga said the inauguration was part of Federal Government's efforts to reposition and grow MSMEs as the major driver of inclusive economic growth through partnerships with State governments on job creation and wealth generation.

The minister referred to the recent survey conducted by the National Bureau of Statistics and SMEDAN, which said that the sector currently represents 97 percent of the enterprises in Nigeria and employs thirty two million Nigerians.

He explained that in a bid to address the problem of lack of access to finance for the development of the sector, the Federal Government through the Bank of Industry developed a counterpart funding scheme and currently has partnerships with seventeen states, while more are in the pipeline for next year, noting that it was this scheme that generated a funding pool of approximately N9 billion for MSME development.

'NEDEP is a new, strategic and revolutionary way of delivering enterprise development in Nigeria with the primary goal of revitalising the MSME sector and creating jobs in the country. It is spearheaded by the Ministry of Industry, Trade and Investment and implemented by the Bank of Industry, SMEDAN and the Industrial Training Fund which are agencies under the supervision of the Ministry.

'Up until now, these agencies have been working in silos and have piloted individual programmes in key states. But we recognise the fact that they would not achieve the desired national impact without working together, which is why for the first time in the history of Nigeria, NEDEP has brought the three agencies together to scale up their efforts in all the states of the federation and to tackle enterprise development in an effective way,' he said.