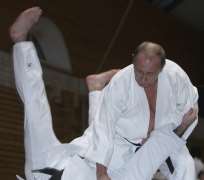 
Not content with recently being named the most powerful person alive by Forbes, Vladimir Putin continued his world conquest this week by joining the ranks of the most elite of martial artists.

According to Russia’s ITAR-TASS news agency, the Russian president was awarded a ninth Dan ranking in Taekwondo by Choue Chung-won, the president of the World Taekwondo Federation, while on a recent trip to the South Korean capital Seoul.

Putin, an avid martial artist, offered a few humble words upon earning the honorary title, saying, “I don’t think I have earned such a high Dan,” according to IB Times UK.

A Dan measures proficiency in a martial art, ranking from one to 10. The Grand Master title puts Putin into rare air, surpassing even the world-renowned martial artist and Total Gym spokesman Chuck Norris, who reportedly holds an eighth-degree black belt in the discipline.

Other leaders and celebrities have earned honorary black belts, according to Ria Novosti, including U.S. President Barack Obama and the leaders of several other nations.

While he does not practice Taekwondo, Putin has earned a black belt in judo and allegedly won a judo championship during his youth in Leningrad. And in 2008, the Russian president released an instructional video in 2008, titled “Let’s Learn Judo with Vladimir Putin,” in which he shared his favorite judo techniques.