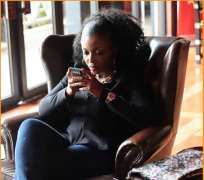 Yvonne Okoro warmed herself into the hearts of movie lovers in 2002her first movie got her six nominations for AMAA 2013, but got angry backlash from public for the dress she wore to the event which gave a good view of her sexy cleavage, her fashion signature has been using dresses or clothes that cover her sexy and vital parts, but not again, she had hinted that she won't hesitate to show boobs on 'Fashion 101' TV show and that she decided to vary her style – the reason for wearing the dress to last year.

Yvonne is very single right now. She wants the men to wait for a while; she thinks she wants to continue living with them. She is single and thinks she haven't had the time too. She is always on my guard because she wants to know the kind of people who come to her.

She has this to say for the love of Ghanaian actresses love their bodies, she explains, 'Our culture does not allow topics like sex and nudity but in a way sometimes I think we are also being hypocritical. A Hollywood movie will come, we will watch it and be happy and compliment them. I think if you are going to do nudity, you should not do it in a tacky way. It should be done with what will conform to our culture. I think it is about choice, if you think you want to remove yourself and think it will help your character and you don't have a problem with it, it is fine.