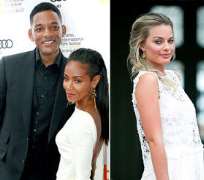 
Will Smith, Jada Pinkett Smith Are “Great” Despite New Cheating Rumor With His Costar Margot Robbie

No broken marriage here! Newly surfaced photos of Will Smith getting mighty close (and partially nude) with his young Focus costar Margot Robbie have sparked rumors that the actor has been cheating on his wife of 16 years Jada Pinkett Smith. However, sources reveal to Us Weekly that everything is still intact in the Smith household.


“They’re not hooking up,” a source tells Us of Smith, 45, and the blonde Australian actress, 23.

The rumors began after the costars took advantage of a photo booth that was available to them during the film’s wrap party. “That was a photo booth on set that the producers got for everyone,” a second insider explains to Us. “It was the last day of filming and everyone was taking pictures. They were just goofing around. Will is just like that. There’s nothing more to it.”

As for his relationship with Pinkett Smith, the actor’s new friendship with Robbie hasn’t affected his marriage at all. “Everything with them is great,” the second source adds.

The 42-year-old mother of Willow and Jaden Smith was last spotted out at the Make Equality Reality event honoring director Joss Whedon on Nov 4. During the event, the actress showed off a drastic new hairstyle with both sides of her head shaved.

This past July, she also shared that it would take a lot to “abandon” her famous husband. “I have been affected by gossip and I know people who have been, too. I’ve seen marriages destroyed by gossip. It is cruel,” Pinkett Smith previously said to Redbook magazine. “At the end of the day, all that matters is: Do you love what you see when you look in the mirror? That is it, baby.”

She added: “What is the thing that Will could do to make me not love him? That would make me abandon him? I can’t think of one. I’m sorry. Except if he did something bad to the kids — now we’ve got a problem.”