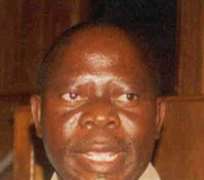 Addressing journalists shortly after he addressed the opening ceremony of Action Congress [AC] National Executive Committee meeting in Benin yesterday, the governor said the leadership of the lower chamber of the National Assembly allowed itself to be manipulated by Chief Tony Anenih to intimidate him, but however stressed: 'I can't be intimidated by anybody.'

While noting that the resolution was 'in bad faith' and 'unacceptable to Edo State', Governor Oshiomhole explained that the suspension which was based on the laws of the state remains, adding that the outcome of the enquiry set up to investigate the two chairmen would form the next line of action.

He reminded members of the House of Representatives that the Edo State House of Assembly was not an organ of the lower chamber of National Assembly, pointing out it is a creation of the Constitution of the Federal Republic of Nigeria. 'The two chairmen suspended remain suspended and there is nothing the House of Representatives could do about that. The law of Edo State gives me the power to suspend them,' he said.

According to the governor, the matter has assumed national dimension, because the chairman of Akoko-Edo Local Government Counccil, Chief Johnson Emasealu is an in-law to Chief Anenih, the factional leader of PDP in Edo State.

He said no one was above the law, adding that the only thing that could save the two council chairmen is if they are innocent at the end of the investigation.

Governor Oshiomhoile regretted that the leadership of the House of Representatives allowed itself to be manipulated in such a manner to pronounce on the matter of impeached Speaker of Edo State House of Assembly which was before a law court.

He observed that even when the attention of the Speaker of the House was drawn to the fact that the matter was in court, he proceeded to deliberate on it in flagrant disobedience to the principles of separation of powers.

'If anyone alleged that his signature was forged, he should go to court', the governor said, describing the comment of Speaker Bankole on the matter as 'unfortunate'.

On the resolution of the House calling on the police to investigate alleged forgery of signature of some members of Edo State House of Assembly to carry out the impeachment of former speaker, Zakawanu Garuba, Governor Oshiomhole said the police investigation must also include those involved in criminality in the assembly.

The Governor, who explained that the Edo State Government had already written to the Inspector-General of Police on the matter, specifically wants the police to investigate and prosecute the former speaker, Hon. Garuba, former Majority Leader, Frank Okiye and Hon. Blessing Agbebaku for allegedly using the gavel, teargas and battle axe as weapons of attack on their fellow lawmakers at the Assembly.

Governor Oshiomhole however said he was proud of a good number of PDP lawmakers of the House of Representatives who he said found courage on the floor of the House to defend democracy.

He told journalists that by going to Abuja, Chief Anenih had admitted that he was no longer on ground in Edo State, adding 'I fully appreciate his frustration. The chief is finished. He is politically finished and nobody can rehabilitate him. I am happy that God used me to finish him.'

Earlier while addressing AC NEC meeting, Governor Oshiomhole gave account of his stewardship in the past 15 months in the state and said the people of the state were happy with his administration's performance.