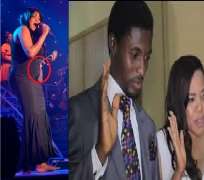 It's no longer news that Yoruba controversial actress, Toyin Aimakhu is some months gone. In fact, it's also a known fact that the entertainment couple quickly rushed to soleminised their union on Monday July 8 2013 at Adeniji Johnson at the Ikoyi Marriage Registry, Ikoyi, Lagos

Now the big story is that, Toyin has been flaunting her tummy to those who care to see that she is months gone.

Recently at Genesis Deluxe Cinema, tucked inside the Palms Lekki, Toyin who got married legally to her actor boyfriend Adeniyi Johnson was sighted taking pictures on the red carpet and showing off her baby bump.

Even at a recently held reality show auditioning held at Ultima Studios, Lekki, Lagos, the baby bump is quite evident with the actress making no efforts to conceal it.

Reports say Aimakhu is at the tail end of her first trimester; with her due date expected to fall around April, 2014.

We wish her safest delivery!