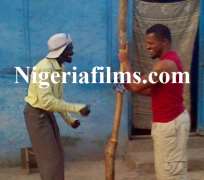 Contrary to the notion that there is a yawning gulf between Ghanaian English language actors and their local language counterparts,

Van Vicker, a stalwart in the English movie circles is in Kumasi shooting a new local movie with actor Kojo Nkansah Lilwin.

Speaking to Nollywoodgists.Com Correspondent (Mustapha Ayinde Inusah) AKA Attractive in Ghana, actor Van vicker who is the CEO of Sky Orange Production disclosed that it wasn't the first time he had been involved with local language actors.

“Don't forget I shot my 4th film with Agya Koo who's also a Kumasi movie actor and that time, I made that decision because I wanted to tell that movie story in a best way and I had no other person in mind than Agya Koo. I finally picked Agya Koo for that role in my movie 'Johnny Walker' because I was trying to break the notion that the English speaking actors don't want to shoot in Kumasi nor with the local language speaking actors,” he said.

He explained that the movie he's shooting with Lilwin now in Kumasi, is not his but rather he was employed just as an actor to go and shoot with him and personally he sees nothing wrong with playing a lead role with Lilwin.

He said that he just directed a local production job in Ghana and then went to Tanzania for a shoot. After the Kumasi shoot with Lilwin, he will start directing his 8th movie titled 'The Fort' which will be the 6th movie he has produced and directed.

According to Van Vicker, his involvement with actors in Kumasi has nothing to do with the perception that local language movie industry is now more lucrative than the English and that he is just going there to rake in some revenue. He says his motive is to bring about unity between these two groups of actors.