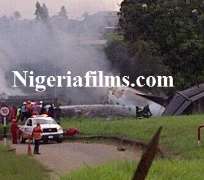 Associated Airline plane just crashed on take off near the airport toll gate. 20 passengers on board heading to Akure.Recovery in progress.Read IT HERE

Six survived. The plane crashed where there are tanks with aviation fuel.Gory sight to behold.

According to reports it was carrying the corpse of former governor of Ondo State: Gov Agagu

Press Release By Minister of Aviation

An Embraer aircraft operated by Associated Airlines with Reg No SCD 361 enroute Akure from the Murtala Mohammed Airport, Lagos, crashed shortly after take-off at about 9.30 am local time. The plane had 20 passengers and 7 crew members on board.

Emergency rescue operations commenced immediately by a combined team of Fire Service and security personnel . Some persons pulled out from the aircraft have been rushed to the hospital while a few dead bodies have been recovered, The rescue operations is still on-going. Jim Iyke and Nadia definitely have something going on