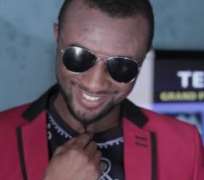 Known for recognizing hardwork and professionalism amongst local and international artistes in Nigeria, Gbedu Awards has nominated Fountain's hit single, 'Imara Na' for this year's award.

According to a release made available by the convener MC Morris, the wave-making single was nominated for its eccentric lyrics, which he further stressed has gained grounds in the Nigeria's airplay top-charts as most played and enjoyed single of the year.

Signed under a world known and Houston based musical label, Dj Mix Master Brown (MMB), Fountain who is originally known as Kingsley Chikodi is a dancehall artiste based in Lagos. He is a graduate of Theatre and Communication Arts (University of Jos).

Also known for his Afrocentric fusion to dancehall, he has worked with A-rated artistes and producers in Africa, like RyMzo, MI, E-Kelly, Exell, Jordan King, Indomix and few others.

The cute looking singer is ready to shoot to limelight with his double singles "Imara Na?" and "No Lies," both tracks were produced by one of the best producers in Nigeria, E kelly.