BAD LEADERSHIP IN IMO STATE AND THE CHALLENGES AHEAD 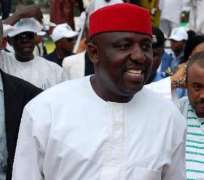 One of the major challenges facing our leaders is on how to apply the principles of love in leadership. We have so many political leaders that are full of selfishness. According to St. Jerome, “True love possesses great power, he who is perfectly loved binds entirely to himself the will of the lover. Nothing is more commanding than love”. For Mother Teresa of Calcutta, “Do not go to a place where there is no love even if the clouds there rain gold”.

I will not fail to note the mistake of both the old and the young. The old are lost in brooding over the past which they normally call 'good old days'. The young on the other hand, are concerned about planning their future. Both old and young have refused to realize that the present is both the product of the past and the seed for the future. According to Professor Philip Ogbonna, “If the present is properly taken care of, the future will be good of its own accord”.

The government as is evident is composed of those who are out to loot the treasury of the state. The politicians are greedy with the result that we now have politics without principles and politicians without any code of conduct. The ruling class is insensitive, oppressive, and insincere. The main cause is ignorance resulting to their spiritual directionless and blindness to the proper human values. A situation that made Emmanuel O. Franklyne to lament thus, “This place has matriculated into the best place to be a criminal in Africa. Criminals rule as governors. Ex-convicts are in various positions of integrity and authority. Certified crooks are in the legislatures and judiciary sowing seed of malevolence everywhere. In Nigeria, thieves are given places and titles of honour both in the churches, mosque and in the society”.

Relating the above to Imo State, the evidence speaks volume. The question is, will the leaders of today not answer for this before humanity and posterity? I feel for the young people because their future seems to be bleak. But God forbid! The old we see lament for the good old days, what shall the youths of today be proud of? This is a serious question which words alone and the watery slogan of “my people, my people” cannot solve. For words to achieve their goals, they must be matched with action. That is the real meaning of the igbo saying, “Ana ekwu ekwu, ana eme eme” meaning, “matching our words with action”.

We certainly need men and women who are versed in rhetorics, but of what use are rhetorics that cannot be translated into action and be concretized? Some of our old politicians like Dr. K.O. Mbadiwe had a dream like Martin Luther king of United States of America; while Dr. Mbadiwe used words to move crowds he consequently received accolades and after word the show ended with vibrating words which thereafter became property for Museums. The difference between the dream of Dr. Mbadiwe and Martin Luther lies in words and action. While Dr. Martin Luther King's dreams have become realities and others are still in making, hardly has any of Mbadiwe's dreams seen the light of the day. His wonderful dreams of eradicating poverty in Nigeria, free education for the children of the poor to mention a few all became a mirage, reason for it being that such dreams were bereft of proper action.

Great challenge waits whoever shall emerge the governor of Imo State in 2015 owing to our present situation. Now that we have a governor that talks more than he can do, the situation has become topsy-turvy. Gov. Rochas will be remembered by so many wrongs he accomplished than the good he intended. This is because he is too loquacious and does little or nothing to affect the lives of the Imolite. The youths are crying for unemployment, the ones that were engaged by the previous administration were disengaged by Rochas Okorocha.

Today, it is one announcement for the sale of employment forms, tomorrow, it is another information for the sale of another employment forms; the sincere youths will gather at the State Secretariat to purchase the forms yet none of them have gotten any employment. This is a government of deception! How can Rochas employ some Imo youth when the severance allowances of civil servants are not paid? He knows the game that he is playing; it shall soon back-fire.

Imo is presently experiencing a system of political administration where the winner takes it all. In fact democracy in Imo State is better defined as the government of Okorocha for Okorocha and his household. Those who serve in his cabinet can attests to this. Majority of the sacked political appointees saw hell in the hands of Gov. Okorocha's numerous relatives and in laws. My friend Mr. Jerry Okoli who had his best moment in the hands of EFCC can tell better if he is not afraid of his former pay-master.

I pity whoever would emerge the next governor of Imo State in 2015 because he will obviously inherit dept that his administration cannot pay as a result of misappropriation of funds occasioned by bad leadership of Gov. Okorocha.