Some People Criticise Us Because They Hate Us 'But'- Kafui Danku 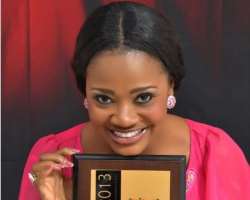 Ghanaian actress Kafui Danku has responded to talk by some people that actors who are going into movie production will not last.

Film producer Abdul Salam Mumuni of Venus Films once said that even though he wouldn't discourage actors from producing movies, those who are doing so cannot reach their peak in the film production business.

Kafui Danku who has also ventured into film production told Nollywoodgists.Com Reporter In Ghana Mustapha Ayinde Inusah (Attractive) that she thinks that everyone is entitled to his opinion and has the right to voice out their feelings depending on their specific reasons.

She added that sometimes when a veteran decides to advice an up comer, the best thing for the new comer is to listen and not to smack the advice.

She whispered that Abdul Salam's statement has prompted her to be extra careful in her dealings and also made her realize that movie production might not be easy. Therefore she needs to learn and plan more before producing. I think in this industry, it is better to listen to advice and not to act as if when someone advices you, then the person hates you”.

“Yes, it is true some people come on radio to talk negative because they hate but always try to listen more in order to make corrections,” she added. “I Just finished shooting my second movie titled 'Devil In The Dress' which features Majid Michel, Roselyn Ngissah and Uti and I believe that if the first movie 'Letters to My Mother' did not go well, I would have stopped shooting.

Kafui's first movie 'Letters to My Mother' got lots of reviews both locally and internationally. Her superb role in the movie earned her the 'Best New Actress' of the Year (Ghana) at the just ended 2013 City People Entertainment Awards, alongside being nominated in the NFCA Awards U.S.A. Ivory Coast Films Awards and is now expecting an award from other organizations like Zafaa Awards.

She lamented that when she decided to enter into production, she heard a lot that it would make producers sideline her from getting more roles but contrarily she thinks she has gotten more movie roles and she's even shooting more movies day in and out.

This month, she has also added up a release of an exclusive photo shoot, to her gallery which is generating lots of comments in the social media. We at Nollywoodgists.com wish her a good-luck in her chosen career and also will be expecting her next movie, as she promises to outdoor it soon.

Nkiru Sylvanus Responds To Rumour On Romance With Imo Governor