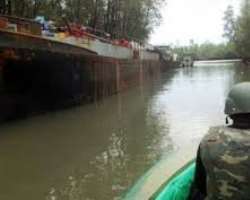 The made the catch  along the Kasabobo Creek during a week-long anti-oil theft patrol targeted at sanitizing the Southern Ijaw local council creeks and waterways in Bayelsa State.

The troops, under Brig.-Gen. Osasogie Uzamere, had embarked on the operation following reports of persistent oil theft in the area despite regular clampdown by the JTF.

The Joint Media Coordinator of the Command, Lt. Col. Onyema Nwachukwu, said in a statement in Yenagoa that the barges, CWTC 16 and TIKORO 2, with eight compartments each filled with stolen crude, were intercepted on the way into the international waters through Forupa channels.

In another operation in Delta State, troops of 3 and 19 Battalions covering the JTF Sector 1 area have arrested seven pipeline vandals in Atiowowo, Kolokogbene and Ejere junction of Warri North and Warri South local councils.

Also recovered from the suspects were a hand-drilling machine, drilling pipe, hoses, hammers and cutlasses.