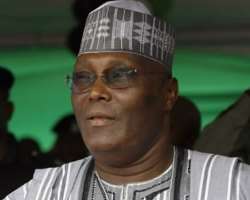 Baring any last minutes change of plans, the Peoples Democratic Party, led by Alhaji Bamanga Tukur may consider the expulsion of its members who have formed a parallel political party called 'the New PDP.

Notable on the list of members to be expelled are: former Vice President Atiku Abubakar, Governors Rotimi Amaechi of Rivers, Sule Lamido of Jigawa, Babangida Aliyu of Niger, Murtala Nyako of Adamawa and Rabiu Kwakwanso of Kano State.

The party is also considering other sanctions for anyone of its rank and file members hobnobbing with the 'new PDP'.

The move which has already been communicated to the President by some members of the National Working Committee, NWC,  is receiving 'serious consideration,' a top party member told Pointblanknews.com.

The source said PDP also intends to approach the court to stop further use of its name by any person, group or organization without the authorization of the PDP, which is a franchise, and a legal entity registered as a Political party and duly recognized by the Independent Electoral Commission of Nigeria, INEC.

According to the source who does not want to be named, such moves will stop the growing impunity of members whom he accused of trying to tear down the party because of their agitation for a Northern Presidency in 2015.

The source further hinted that it took the quick intervention of president Goodluck Jonathan to stop the expulsion from being announced after the Sunday meeting.

'The president prevailed on the PDP leadership from announcing any expulsion because he wants opportunities for dialogue to be exhausted before any major decision is reached,' the source told Pointblanknews.com.

The first meeting between the party elders and the break away Governors which held on Sunday had President Goodluck Jonathan and Ex President Olusegun Obasanjo in attendance. A follow up was scheduled for Tuesday night.

But feelers earlier today indicated the Baraje faction might not attend for sundry reason including the insistence that Atiku Abubakar be invited.

Atiku is currently on overseas trip and billed to deliver a paper at the London School of Economics, LSE.

They had also approached a High Court seeking the nullification of Saturday’s convention and election of officials.

At that Sunday meeting they had also demanded the sack of Bamanga Tukur, that Jonathan should drop the idea of running in 2015 and that he should order the EFCC to stop ‘harassing’ Governors, their officials and aides

The meeting was to discuss the crisis that has split the PDP into two, with a faction headed by Alhaji Bamanga Tukur and the other by Alhaji Abubakar Kawu Baraje, commenced at 9:10pm when Jonathan arrived at the venue.

Among those at the meeting were the Special Adviser to the President on Political Matters, Ahmed Gulak; the Delta State Governor, Dr. Emmanuel Uduaghan; the Secretary to the Government of the Federation, Senator Anyim Pius Anyim; and Tukur.

Newsmen were sent away from the vicinity of the meeting, which was described as a family affair.

Jonathan was initially expected to meet with the governors elected on the platform of the party but who are with the splinter faction headed by Baraje and those still loyal to him.

Owing to this, the meeting was cancelled.
But this was after the governors believed to be loyal to Jonathan had arrived in Abuja for the meeting.

The governors elected on the platform of the PDP but who have teamed up with the Baraje-led executives include Sule Lamido of Jigawa State, Babangida Aliyu of Niger State, Aliyu Wamakko of Sokoto State, Rotimi Amaechi of Rivers State, Murtala Nyako of Adamawa State and Abdulfatah Ahmed of Kwara State.